Thrill of the Climb: Pro-Pot or No-Pot? A Study of the Views and Usage of Marijuana in an Honors Community 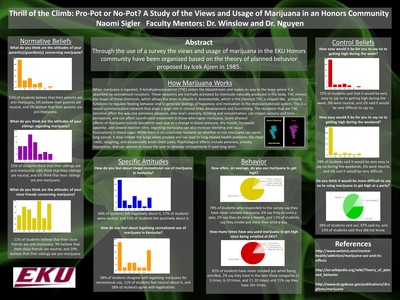 The purpose of this research was to collect data on the views and usage of marijuana in the Honors community here at EKU. With the views on marijuana changing nation-wide, I was curious as to how marijuana was perceived by those in an Honors community. I chose the Honors community due to the juxtaposition of the stereotypes for those who smoke weed vs those who do well in academic settings. Since my research deals with illegal activity, I had to go through the IRB for approval before administering the survey and putting up flyers for the interview. I created and sent out a survey through the Honors Facebook page and the Honors director, Dr. Coleman, also sent it out to current students via email. I wanted to conduct interviews as well for a deeper understanding of why the student felt the way they did and to why or why not they use marijuana recreationally, but nobody volunteered for a one-on-one. I included the way marijuana works and how it affects the body and body on my poster so that people can view an unbiased representation of marijuana. To analyze my data, I used the theory of planned behavior since it helps break down how an individual thinks into four categories- Normative beliefs, or how they believe others perceive marijuana, Control beliefs, or how well an individual believes they can control their marijuana usage, Specific attitude, how they feel about it themselves, and Behavior, or how often they use marijuana.