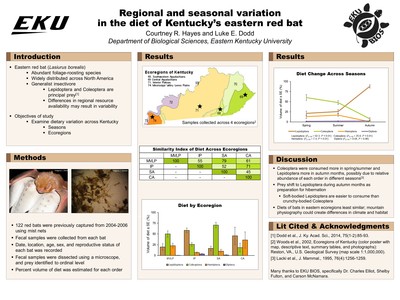 Eastern red bats (Lasiurus borealis) are generalist insectivores widely distributed throughout eastern North America. While the dietary composition of red bats has been generally studied, dietary variation in Kentucky is not well documented. To evaluate potential variation across ecoregions or seasons, we analyzed 122 individual red bat fecal samples collected from locations throughout Kentucky between June 2004 and September 2006. The location, date, sex, age, and reproductive status of each bat were recorded, the fecal samples were dissected under magnification in the lab, and the prey in the fecal samples were sight-identified to ordinal level. Results of our study suggest that overall, Coleoptera (beetles) and Lepidoptera (moths) were consumed about equally. Coleoptera comprised most of the diet in spring and summer with a drastic shift to Lepidoptera as the main prey item in autumn. Coleoptera were consumed more in the Mississippi Valley Loess Plains and Southwestern Appalachian ecoregions, whereas Lepidoptera were consumed more in the Central Appalachian and Interior Plateau ecoregions. These data suggest considerable variation in the red bat diet throughout Kentucky due to climatic or other regional environmental factors. Red bats may favor Lepidoptera in autumn to build essential energy reserves in preparation for hibernation. Additional analyses of these data will explore the dietary variation between Kentucky’s male and female red bats across multiple reproductive stages.