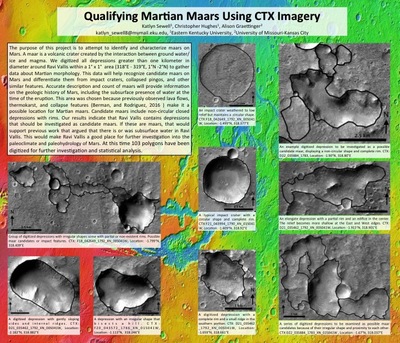 This project is an attempt to identify and characterize maars on Mars. A maar is a volcanic crater created by the interaction between ground water/ice and magma. This area was chosen because previously observed lava flows, thermokarst, and collapse features make it a possible location for Martian maars. This project will help recognize candidate maars and differentiate them from impact craters, collapsed pingos, and other similar features. Accurate descriptions and counts of maars will provide information on the geologic history of Mars, including the presence of subsurface f water at the time of the eruption.

All depressions greater than one kilometer in diameter around Ravi Vallis, within a 1° x 1° area (318°E - 319°E, 1°N -2°N), were digitized. Depressions were traced using a custom shape layer at 8,192 pixels per degree. Digitized features were then recorded in a database, and described in terms of their central latitude, central longitude, major and minor axes, symmetry, area, perimeter, cross cutting relationships, the presence of dunes, and other relevant observations. Candidate maars include non-circular closed depressions with rims.