“Keeping Down the Underground:” The Underrated Value of Indie Music Scenes as Economic Development Tools for Small American Cities 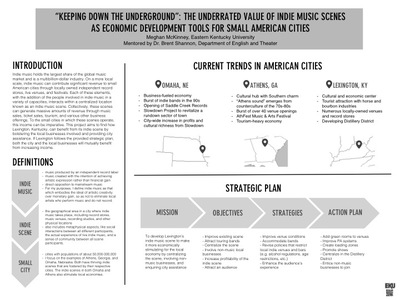 Indie music holds the largest share of the global music market and is a multibillion-dollar industry. On a more local scale, indie music can contribute significant revenue to small American cities through locally owned independent record stores, live venues, and festivals. Each of these elements, with the addition of the people involved in indie music in a variety of capacities, interacts within a centralized location known as an indie music scene. Collectively, these scenes can generate massive amounts of revenue through music sales, ticket sales, tourism, and various other business offerings. To the small cities in which these scenes operate, this income can be imperative. Cities like Athens, Georgia, and Omaha, Nebraska, serve as examples of successful, highly profitable indie rock scenes. Lexington, Kentucky, is a viable location to replicate the success of these cities based on its current economic and social climates, the central place theory, and the creative class theory. By replicating and modifying the methods these cities used to develop working indie scenes, Lexington, Kentucky, can attain similar levels of success that would benefit the scene both culturally and economically. Based on the conclusions drawn, a strategic plan accompanies this thesis to serve as a model for Lexington to follow to best develop a rich, thriving indie music scene.