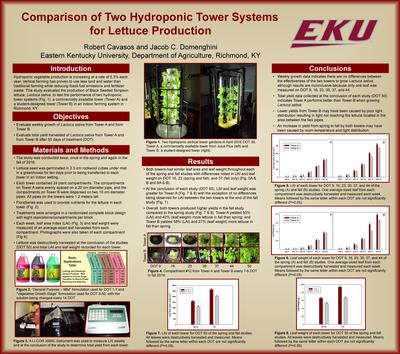 Hydroponic vegetable production is increasing at a rate of 5.3% each year. Vertical farming has proven to use less land and water than traditional farming while reducing fossil-fuel emissions and fertilizer waste. This study evaluated the production of Black Seeded Simpson lettuce, Lactuca sativa, to test the performance of two hydroponic tower systems, a commercially available tower and a student-designed tower in an indoor farming system in Richmond, KY. Each tower contained 24 plant compartments. The commercial tower compartments were evenly spaced on an eight-inch diameter, four-foot-tall pipe; the student-designed tower compartments were dispersed on two four-inch-diameter pipes that were four feet tall. The commercially-available tower, a product by Juice Plus, and the student-designed tower were evaluated during two studies in 2016. An average-size leaf from each compartment was harvested weekly and leaf area index (LAI) and leaf weight were measured. Lettuce was destructively harvested at the conclusion of the studies and total LAI and leaf weight recorded for each tower. The commercial tower produced significantly higher yields (P=0.05) with an average LAI of 2092.4 cm2 and leaf weight of 66.9 g per compartment compared to the average LAI and leaf weight yields of the student tower which were 1594.2 cm2 and 52.2 g respectively. Lower yields from the student tower may have been caused by poor light distribution resulting in light not reaching the lettuce located in the area between the two pipes.