The Effect of Head Tilt on Cuteness Perception in Puppies 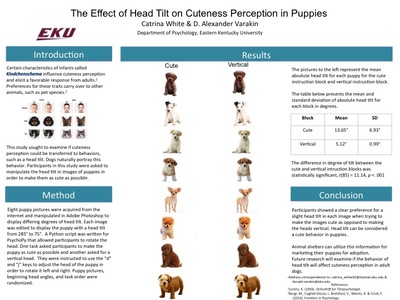 Physical attractiveness is perceived as good and is considered beneficial. Cuteness is an attractive physical attribute of babies that often induces a caring response in adults. Certain features contribute to cuteness, such as large eyes or a large head. Adults favor these characteristics. This cute effect can be generalized to other species, such as dogs. Participants showed a preference for dog pictures with high levels of infantile characteristics over pictures of dogs low in infantile characteristics (Hecht & Horowitz, 2015). Eye tracking methods have shown fixations around eyes and mouths of pictures of dogs and cats (Borgi et al., 2014). Past research has focused on features, but this study shifts to behaviors, specifically the effect that head tilt has on a puppy’s cuteness. Characteristics are static, but head tilt is a trainable and variable behavior. Participants controlled the degree of head tilt of puppy pictures. In one block, the instructions were to make the puppy as cute as possible, and in another the instructions were to make the puppies’ heads vertical (block order was randomized). If observers prefer puppies with tilted heads, they should choose head orientations that are further from upright in the cute block than the vertical block. The average cute-instruction angle was significantly further from 0 deg. than the average upright-instructions. This result suggests that head tilt increases the cuteness of puppies.