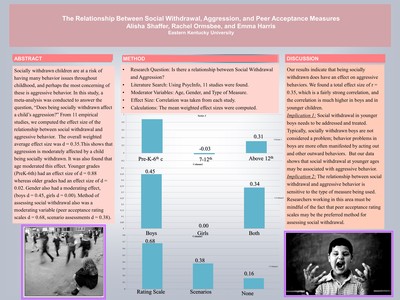 Socially withdrawn children are at a risk of having many behavior issues throughout childhood, and perhaps the most concerning of these is aggressive behavior. In this study, a meta-analysis was conducted to answer the question, “Does being socially withdrawn affect a child’s aggression?” From 11 empirical studies, we computed the effect size of the relationship between social withdrawal and aggressive behavior. The overall weighted average effect size was d = 0.35.This shows that aggression is moderately affected by a child being socially withdrawn. It was also found that age moderated this effect. Younger grades (PreK-6th) had an effect size of d = 0.88 whereas older grades had an effect size of d = 0.02. Gender also had a moderating effect, (boys d = 0.45, girls d = 0.00). Method of assessing social withdrawal also was a moderating variable (peer acceptance rating scales d = 0.68, scenario assessments d = 0.38).