Factors Relating to the Ability to Identify Sexual Harassment 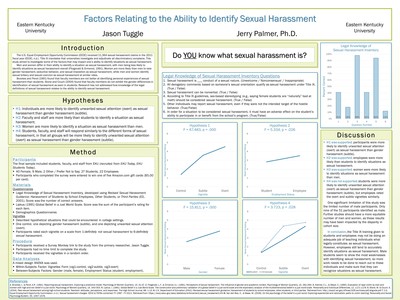 Before someone can question whether to report sexual harassment, they must first be able to identify it as such. The purpose of this project was to investigate some of the factors that may be related to someone’s ability to identify sexual harassment, including gender, role within the university, knowledge on Title IX policy, and just world beliefs. Participants were given the Lipkus (1991) Global Belief in a Just World Scale, a test on Title IX policy developed using information from the US Department of Education’s Revised Sexual Harassment Guidance (2001), three vignettes portraying hypothetical situations that could be encountered in a college setting, and a demographic survey. Just world beliefs were not significantly correlated with either willingness to report nor the degree to which the participant considered the vignette to be sexual harassment. Faculty and staff correctly answered questions on Title IX policy at chance level, and did not score significantly higher than students. This suggests that current training methods do not improve individuals’ understanding of Title IX. Score on the Title IX quiz was not significantly correlated with identifying a situation as sexual harassment, though this may be in part due to a ceiling effect from the low quiz scores. Participants performed significantly better on certain Title IX quiz items than others, highlighting specific weaknesses that can be addressed in the future. Information found in this study could be used to advance anti-harassment efforts and improve Title IX training for students and employees.