Ascension of the Armies: The Impact of Ballooning during the Civil War 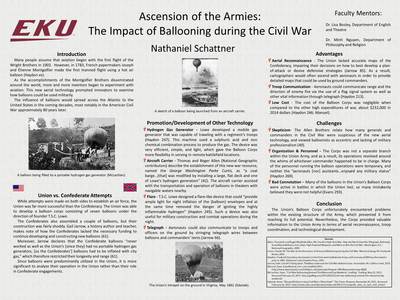 While much is discussed about the naval and land fronts of the Union and Confederate armies during the American Civil War, little is mentioned about the growth of aviation, specifically ballooning. My research explores the nascent emergence of aerial reconnaissance during the Civil War by analyzing efforts by both sides to develop a balloon corps. However, since the Union’s efforts were much more successful than those of the Confederates, I primarily focused on the advantages and challenges of the Union’s Balloon Corps. I also examined how the development of such an entity concurrently spurred other innovations and laid the foundations for the technology we have today.