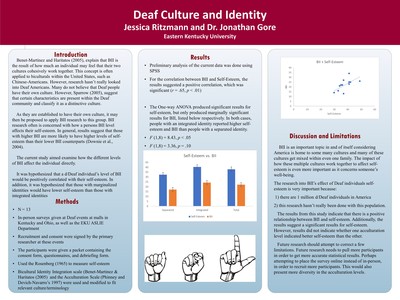 Bicultural Identity Integration (BII) is the result of how much a bicultural individual may feel that their two cultures cohesively work together, such as Chinese and American cultures (Benet-Martínez & Haritatos, 2005). Its effect on self-esteem has previously been looked at with immigrant families but has not really been looked at in regard to that of Deaf individuals with Deaf culture and hearing culture. The current study’s goal was to investigate the relationship between BII and a Deaf individuals self-esteem. It was hypothesized that 1) a Deaf individual’s level of BII will be positively correlated with their self-esteem. 2) those with marginalized identities will have lower self-esteem than those with integrated identities. Participants for this study (N=13) were recruited from different Deaf social within Kentucky and Ohio. The participants were recruited using American Sign Language and were given a survey to complete. Data was analyzed using a Pearson’s r correlation and a One-Way ANOVA. Preliminary results suggest a positive correlation between BII and self-esteem, supporting hypothesis one. However, hypothesis two was not supported by the results