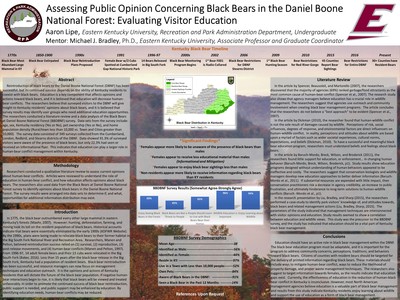 Reintroduction of black bears to the Daniel Boone National Forest (DBNF) has been successful, but its continued success depends on the ability of Kentucky residents to coexist with black bears. Education is a key component that affects opinions and actions toward black bears, and it is believed that education will decrease human-bear conflicts. The researchers believe that surveyed visitors to the DBNF will give insight to Kentucky residents’ opinions about black bears, and it is believed that survey results may identify user groups who need additional education opportunities. The researchers conducted a literature review and a data analysis of the Black Bears at Daniel Boone National Forest (BBDBNF) survey. Data sets from the survey include: age, sex, Kentucky residency (Yes or No), pet ownership (Yes or No), and home population density (Rural/town less than 10,000 vs. Town and Cities greater than 10,000). The survey data consisted of 349 surveys collected from the Cumberland, London, Redbird, and Stearns districts of the DBNF. Data showed 91.3% of surveyed visitors were aware of the presence of black bears, but only 22.3% had seen or received an informational flyer. This indicates that education can play a larger role in human-bear conflict management within Kentucky.