The Selfie of Dorian Gray: Adapting Literature for Modern Media 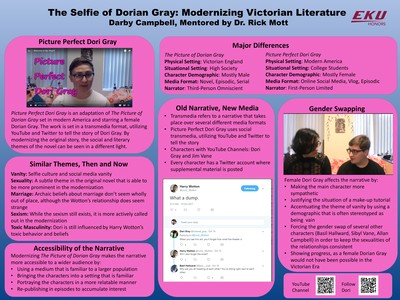 Picture Perfect Dori Gray is a modern adaptation of The Picture of Dorian Gray set in modern America and starring a female Dorian Gray. The work is set up as a web series that takes place on YouTube in the form of a vlog run by Dori herself. The transmedia world consists of both YouTube content and Twitter content that all contribute to one over-arching story world. Modernizing the narrative, setting, media, and characters highlights which literary themes and motifs of the original novel are still relevant today and which symbols have changed since publication. The greatest effect on the novel is likely a result of the new media format, as this format changes not only the setting, but also the narrator and the perspective from which the audience is given access to the story. The purpose of this project was to take a piece of Victorian literature and bring it into the modern world, making it more accessible to a new generation. The new media format makes it possible for people who otherwise would not have been able to access the original work due to language barriers or other such obstacles to enjoy this narrative.