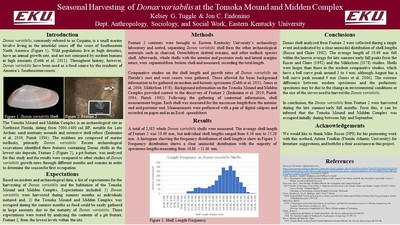 Analysis of faunal remains in archaeology is used to determine dietary and cultural practices and human-environment relations through time. At the Tomoka Mound and Midden Complex in Northeast Florida, several mounds and ridges dating from approximately 5000 – 4400 cal BP are composed of shells from aquatic invertebrates. Many different species of mollusks have been identified in the shell mounds and general midden with the most common being coquina clams, Donax variabilis, which inhabit the high energy environment of the intertidal zone and have an annual life cycle. During recent archaeological investigations led by Eastern Kentucky University professor Dr. Jon Endonino, two refuse pit features and one hearth containing Donax shell were identified and excavated. For this study, the annual growth rates of Donax were determined to identify the season of harvest and, by extension, when the pit features and hearth were created and used. Season of harvest is determined by measuring whole shells from the anterior to the posterior with digital calipers, yielding the total shell length, and comparing the shell length data to growth-rate curves derived from modern datasets. Together, an estimation of the season(s) of harvest and, by extension, the time of year the site was occupied and the features were created, are obtained.