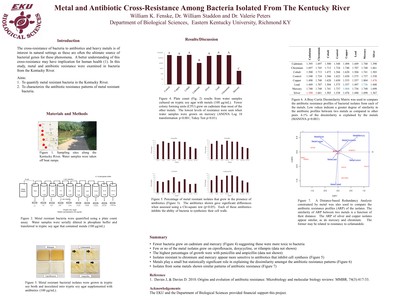 Little is known about metal and antibiotic cross resistance among bacteria in aquatic settings. Water samples were collected from six locations along the Kentucky River. Plate counting was used to quantify metal-resistant bacteria. Control and metal resistant isolates were transferred to plates containing antibiotics. Populations of cobalt, copper, silver, lead and chromium resistant bacteria were similar to the control. Cadmium and mercury resistant populations were significantly lower. Many isolates were resistant to ampicillin, cefamandole sulfamethoxazole, penicillin, and vancomycin. Most inhibition of growth was seen with ciprofloxacin, erythromycin, doxycycline and rifampin. The results suggest there are much higher levels of metal resistance amongst the river bacterial isolates than expected.