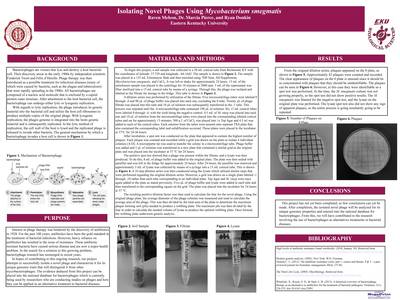 Bacteriophages are viruses that infect and lyse host bacteria. In the 19thcentury, bacteriophages were one of the only available treatment options for infections. However, for the past 100 years, antibiotics have been the prevalent source of treatment. Problems have risen from the heavy use of antibiotics, specifically the issue of resistance and its exponential growth in recent years. Researchers have begun looking for alternatives to antibiotics, and bacteriophage research in the biomedical field has resurfaced. The presented project is Isolating Novel Phages with Mycobacterium smegmatis.The objective of the phage project was to successfully isolate and characterize a novel phage from soil samples that were collected in hopes of contributing to the ongoing research with bacteriophages. A sample of soil was collected, and then enriched/filtered to produce a filtrate. The filtrate was then ran through a dilution series so that the phage could be isolated and purified. Once isolated, the phage was analyzed for its molecular, physical, and genetic properties. These characteristics were then used to aid in the identification of the phages unique genomic traits that distinguished it from other mycobacteriophages. The evidence deduced from this project can be placed into the national database for bacteriophages which is used by researchers conducting studies on phages as an alternative treatment to bacterial diseases over antibiotics.