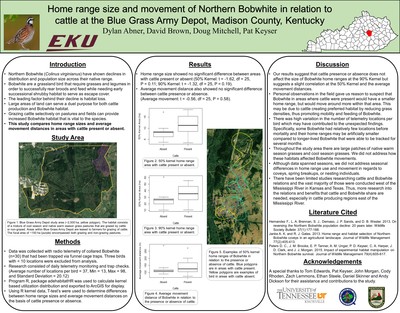 Northern Bobwhite (Colinus virginianus) are a grassland bird that have shown declines in distribution and population size across their native range, primarily because of habitat loss. Cattle pastures are a dominant landscape feature in the Bluegrass, yet few studies have investigated Bobwhite use of pastures. Grazing cattle selectively on pastures and fields may provide increased Bobwhite habitat that is vital to the species. This study compares home range sizes and average movement distances in areas with cattle present or absent at the Blue Grass Army Depot. To determine this, we used radio telemetry of captured Bobwhite (N = 30) to monitor movements. To determine home range and movements, Program R adehabitatHR was used to calculate 50% and 90% kernel-based utilization distributions (i.e., home ranges), and movement paths. ArcGIS was used to display results. Results showed no significant difference in cattle presence or absence for home range and movements. These results were unexpected and may be biased by seasonal variation in the behavior of birds, and the presence of patches of both native warm season grasses and cool season grasses.