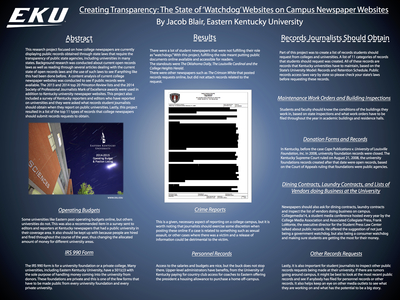 This research project focuses on how college newspapers are currently displaying public records obtained through state laws that require the transparency of public state agencies, including universities in many states. Background research was conducted about current open records laws as well as reading through several articles dealing with the current state of open records laws and the use of such laws to see if anything like this had been done before. A content analysis of current college newspaper websites was conducted to see if public records were available. The 2013 and 2014 top 20 Princeton Review lists and the 2014 Society of Professional Journalists Mark of Excellence awards were used in addition to Kentucky university newspaper websites. This project also included a survey of Kentucky reporters and editors who have reported on universities and they were asked what records student journalists should obtain when they report on public universities. Lastly, this project resulted in a list of the top 11 types of records that college newspapers should submit records requests to obtain.