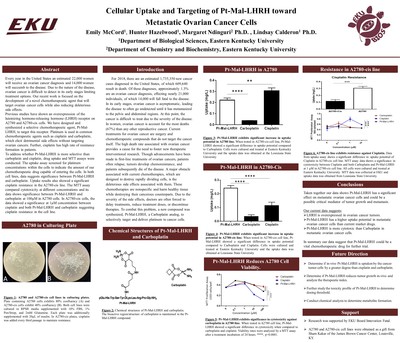 Every year in the United States an estimated 22,000 women will receive an ovarian cancer diagnosis and 14,000 women will succumb to the disease. Due to the nature of the disease, ovarian cancer is difficult to detect in its early stages limiting treatment options. Our recent work is focused on the development of a novel chemotherapeutic agent that will target ovarian cancer cells while also reducing deleterious side effects.

Previous studies have shown an overexpression of the luteinizing hormone-releasing hormone (LHRH) receptor on A2780 and A2780-cis cells. We have designed and synthesized a selective chemotherapeutic agent, Pt-Mal-LHRH, to target this receptor. Platinum is used in common chemotherapeutic agents such as cisplatin and carboplatin, which elicit detrimental side effects without targeting ovarian cancers. Further, cisplatin has high rate of resistance formation in patients.