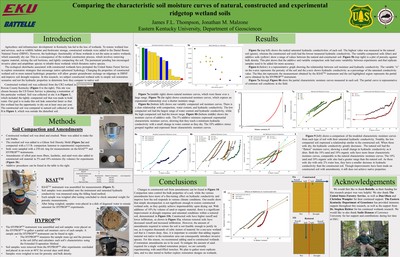 The expansion of agriculture and urban development throughout Kentucky’s history as led to the loss of wetlands. This prompted the construction of new wetlands to restore ecosystem services, such as nutrient cycling and flood control. However, wetland construction practices involve soil disturbances, such as organic matter removal, horizon mixing, and dense compaction. These practices make permanently saturated wetlands that lack native wetland soil properties. Hundreds of constructed wetlands were added in the Daniel Boone National Forest (DBNF) to ridge-tops, where native wetlands have ephemeral hydrology. The overabundance of these wetlands has encouraged invasive plant and amphibian species to inhabit the region to a degree that the US Forestry Service seeks to deconstruct some of these wetlands to restore native hydrology. Our research goal was to determine how adding soil amendments to constructed wetland soils increased permeability and produced more native soil characteristics. We collected natural and constructed wetland soil samples from DBNF and simulated restoration in the lab by altering soil compaction and/or adding sand, organic content, or non-swelling clay. We then determined the soil’s permeability, characteristic moisture curve, density and porosity in the laboratory. We found that changing the soil compaction controlled the bulk properties of the soil, where decompaction increased hydraulic conductivity by three orders of magnitude. Soil additives had the largest affect on the characteristic moisture curve, where sand increased the volume and retention of moisture to a more native range. We recommend a combination of sand and decompaction to restore soil hydraulic properties.