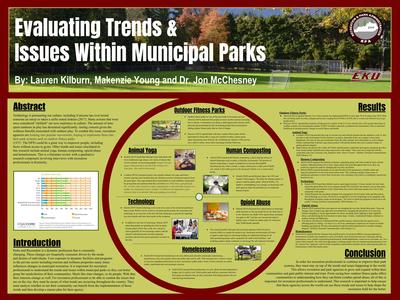 Technology is permeating our culture, including if anyone has ever texted someone an emoji or taken a selfie stated Jenkins (2017). Many actions that were once considered “childish” are now mainstays in culture. Fox and Edwards (2015) reported that American teenagers spend nine hours a day with digital technology. Victor, Moore & Pearce (2017) reported that children 8 to 12 years old spend three times as many hours with electronics per week versus playing outside. The amount of time spent outdoors in play has decreased significantly, raising concern given the wellness benefits associated with outdoor play. To combat this issue, recreation agencies are looking into popular movements, hoping to implement them into their park systems such as outdoor fitness parks (OFP). Healy (2019) writes that by 2030, nearly half of all U.S. adults will be obese and 1 in 4 will be severely obese. The OFPs could be a great way to empower people, including those without access to gyms. Other trends and issues elucidated in this research include: animal yoga, human composting, opioid abuse and homelessness. This is a literature review with a qualitative research component involving interviews with recreation professionals in Kentucky.