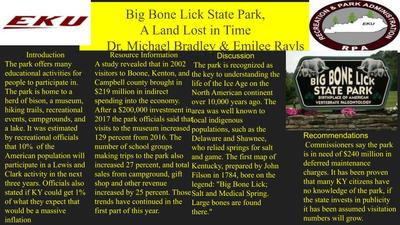 Big Bone Lick State Park is located at Big Bone in Boone County, Kentucky. The park is home to many educational attractions such as; a herd of bison, a museum, hiking trails, recreational events, campgrounds, and a lake. Big Bone has also been recorded to be one of the Lewis and Clark heritage sites east of the Mississippi River. It was estimated by recreational officials that ten percent of the American population will participate in a Lewis and Clark activity in the next three years. The officials also stated if Kentucky could get one percent of the expected grow that would be a huge inflation in the visitation to the state . A study revealed that in 2002 visitors to Boone, Kenton, and Campbell county brought in $219 million in indirect spending into the economy. But since then the park has suffered many budgeting issues park commissioners say the park is in need of $240 million in deferred maintenance charges, also due to the recent flooding in the area the damn has started leaking making the lake and some trails have to close because of safety recently the park received $1.1 million in improvements by Governor Bevin. It is a start to helping this park succeed but I believe the way to get more visitors is to market the park to the public more. Since the park is so rich in history and has so much promise in teaching visitors about the history of Kentucky it should be one of the states top priorities to give this park the funding and advertising it deserves.