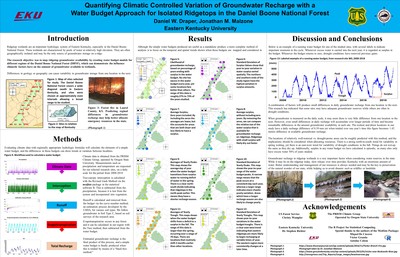 Calculating a water budget for a ridgetop wetland is an essential step in defining the amount of groundwater recharge in a system such as the Daniel Boone National Forest. However, water is a dynamic substance and its variability across a region is often remarkable in extent. Since water has the capacity to respond to local geology as well as many other factors, water budgets calculated for neighboring parcels may be quite different when described by either volume or pattern. Additionally, patterns may appear similar for two (or more) sites yet are shifted temporally, as each location follows its own schedule for the arrival of water and consumption by vegetation.

Detailed knowledge of temporal and spatial patterns found in groundwater recharge has implications for nearly every aspect of a forest system, from the health of flora and fauna, to drought versus flood conditions, and risk of natural disaster such as wildfire or landslide.

Construction of any water budget begins with the identification of all relevant factors and is followed by recognizing which methods of analysis are suitable for the system.

From the PRISM Climate Group, we have acquired an eleven-year dataset of measurements containing daily climatic data for twenty-three locations across the Daniel Boone National Forest approximately four square-kilometers in size. With these precipitation totals and a record of temperature extremes we have sufficient data for the study.

In order to conduct this water budget and find groundwater recharge, we have employed regionally appropriate hydrological formulae commonly applied in forest hydrology. We accounted for tree canopy interception with the revised Gash model, calculated runoff with the curve number method, and found evapotranspiration with the Turc method.

After finding the amount of groundwater recharge possible in each ridgetop system, we have employed some statistical analysis to search for temporal patterns in the budgets.