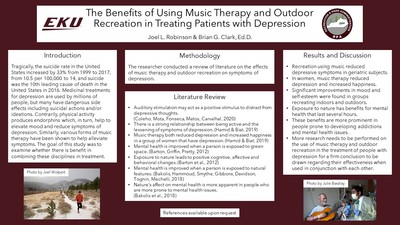 According to the Center for Disease Control and Prevention (CDC), the suicide rate in the United States increased by 33% from 1999 to 2017, from 10.5 per 100,000 to 14. Tragically, suicide was the 10th leading cause of death in the US in 2016 according to the American Foundation for Suicide Prevention. Medicinal treatments for depression are used by millions of people, but many have dangerous side effects including suicidal actions and/or ideations. Physical activity produces endorphins, which, in turn, helps to elevate mood and reduce symptoms of depression. Likewise, various forms of music therapy have been shown to help alleviate symptoms. The researcher conducted a literature review to investigate whether or not there is benefit in combining these forms of therapy for patients suffering from this mental illness. The research found that: music therapy combined with recreation helped reduce depressive symptoms for senior citizens, that outdoor walking improved self-esteem, that music therapy has been shown to reduce depression in women, and that nature improves mental well-being. However, more research must be done in order to draw a direct correlation and prove that these therapies should be used in conjunction with each other.