Isolation of a Single Novel Mycobacteriophage from Soil in the Environment 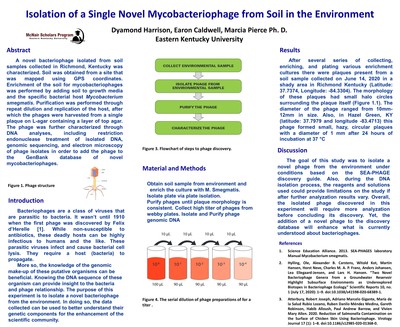 A novel bacteriophage isolated from soil samples collected in Richmond, Kentucky was characterized. Soil was obtained from a site that was mapped using GPS coordinates. Enrichment of the soil for mycobacteriophages was performed by adding soil to growth media and the specific bacterial host Mycobacterium smegmatis. Purification was performed through repeat dilution and replication of the host, after which the phages were harvested from a single plaque on L-agar containing a layer of top agar. The phage was further characterized through DNA analyses, including restriction endonuclease treatment of isolated DNA, genomic sequencing, and electron microscopy of phage isolates in order to add the phage to the GenBank database of novel mycobacteriophages.