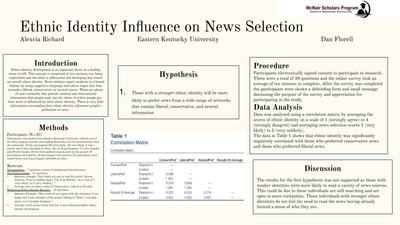 American news networks have been known to push a positive biased agenda towards the white population, which in turn leaves minorities displayed in various negative forms. News stations have different ways of reporting on the same story, which may lead people to choose some media outlets over others. The focus of this study was to analyze if ethnic identity influences an individual's selection of news. To find this out a survey was created, the first part of the survey includes the Political Scale. This measure scales the consistency of one’s political ideologies (i.e. conservative, liberal, and neutral) using sources from news networks including NBC, ABC, and Fox. This was included to analyze which types of news minorities were most likely to give their attention to. The next part of the survey includes the Multigroup Ethnic Identity Measure which was used to scale an individual’s commitment, belonging, and affirmation to one's ethnic identity from one to four. Through the analysis of this survey, researchers found that as ethnic identity strength increased openness to various news sources decreased. We were unable to find a significant number of participants which highly impacted results. These findings indicate how a solidified ethnic identity could influence one’s preference and how those preferences can fluctuate depending on ethnic identity strength.