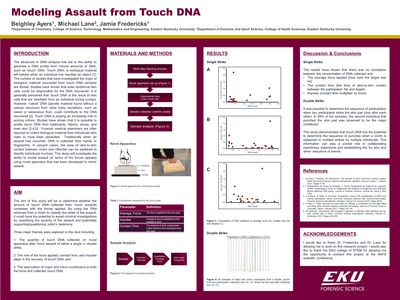 Touch DNA is playing an increasingly role in solving assault related crimes. Touch DNA, is biologically material left behind when an individual has handled an object. In assault cases, the area of skin-to-skin contact between victim and offender can be swabbed to identify individuals involved. This study will investigate the ability to model assault (in terms of the forces applied) using the DNA collected. Novel apparatus has been developed to mimic assault. Preliminary studies have shown that there is potential correlations between the concentration of perpetrator’s DNA collected and several parameters (including force of strike, contact time and impulse (change in force multiplied by contact time)). By using the DNA retrieved from a victim to model the mechanism of the assault, it could have the potential to assist criminal investigations; by classifying the severity of the assault and potentially supporting victim’s testimony.