Atrazine and Glyphosate: Detection of Herbicides in Samples of Water 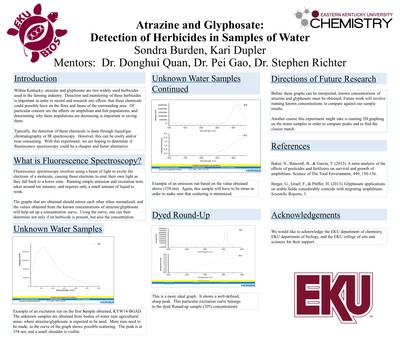 Various bodies of water contain runoff from herbicides that have been used for agricultural reasons. Two, atrazine and glyphosate, are of particular interest due to controversy surrounding their effects on wildlife. Detection of these chemicals is important in performing further research, and finding faster and less expensive methods is ideal. Fluorescence spectroscopy would be easy to run, and is readily available at EKU. It works by using a beam of light to excite the electrons of a molecule, causing those electrons to emit their own light as they fall back to a lower state. To test the fluorescence spectroscope, a control group of known samples of glyphosate and atrazine will be used. The known glyphosate sample is essentially Round-Up and has a concentration of 20%. The known atrazine sample still has to be obtained, but it is expected to be of 4% concentration. After the fluorescence spectrometer is calibrated by known samples, the excitation wavelength, emission wavelength, and the relation between light intensity versus sample concentration will be determined. Then the unknown samples that were collected from various bodies of water in Kentucky will be tested by this method. The experiment is expected to find out if the unknown samples contain either glyphosate, atrazine, or both. If the compounds are found in the collected water samples, the concentrations will also be identified. This study may help to identify the cause of significant decreasing number of frog populations in the area and can reveal the environmental effects of using herbicides.