Who I Am and Who I Used to Be 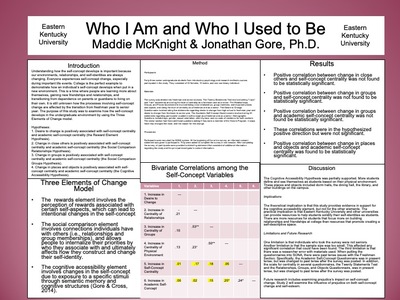 Past research regarding self-concept change has inconsistent definitions. However, one framework, the Three Elements of Change Model, was developed to fix this issue. The first element is the rewards element, which involves the perception of rewards associated with certain self-aspects, which can lead to intentional changes in the self-concept. The second element is that social comparison element, which involves connections, like relationships and group memberships, individuals have with others. The third element is the cognitive accessibility element, which involves semantic memory and cognitive structures. The goal of the study is to understand the impact of the transition from freshman year to senior year has on the self-concept. In this study, seniors at Eastern Kentucky University were asked to reflect on their freshman year to examine differences in how they identify themselves. Participants completed self-reports for both their freshman year and senior year. Materials included the Twenty Statements Test and questions regarding desire to change, relationships, groups, and places, and academic self-concept. The main findings discovered that students self-identify themselves as students based on their physical environment, like the campus library or dining hall. The main implication is that colleges and universities need to offer more resources to promote this self-identification.