Clues to Insight During Incubation 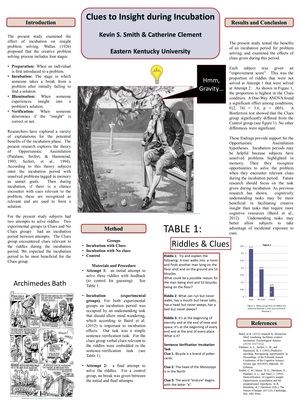 The present study examined the effect of “incubation” on insight problem solving. Incubation refers to the processes that occur during a break between an initial and final attempt to solve a problem. The present research explored the Opportunistic Assimilation (OA) theory of incubation effects (Seifert, Meyer, Davidson, Patalano, and Yaniv, 1994). According to this theory, incubation is beneficial when there is a chance encounter, during the incubation period, with information that is relevant to a previously unsolved problem. If subjects enter the incubation period with an unsolved problem active in LTM, and relevant information is encountered, the mind is prepared to recognize this information and use it to later achieve problem insight. In the present experiment, two experimental groups, a “clues” and a “no clues” group, experienced three phases: an initial attempt to solve a set of riddles, an incubation period during which they engaged in an undemanding task, and a final attempt to solve the riddles. A control group received no break between the initial and final riddle solution attempts. For the clues group, but not for the no-clues group, verbal clues that were relevant to the riddles were embedded in the incubation period task. I predicted that the success rate during the final attempt to solve previously unsolved riddles would be the highest in the clues group and lowest in the control group.