Capital Punishment at Home and Abroad: A Comparative Study on the Evolution of the Use of the Death Penalty in the United States and the United Kingdom 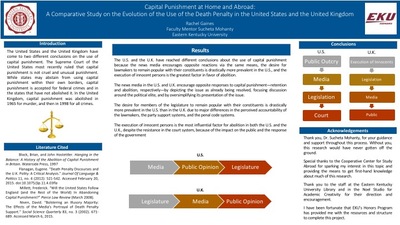 Capital punishment (sometimes referred to as the death penalty) is the carrying out of a legal sentence of death as punishment for crime. The United States Supreme Court has most recently ruled that capital punishment is not unconstitutional. As a result, states are free to abstain from using capital punishment or to use it, and it is accepted for federal crimes. In 1965, the United Kingdom eliminated the use of capital punishment for murder on a temporary basis, abolishing it permanently in 1969, and adopting two European protocols that eliminated its use perpetually for all crimes in 1998. This research investigates why two countries that were once united—where one was formerly a colony of the other—have come to different conclusions about the death penalty and its use. Additionally, what factors were the most important? Research has shown that the influence of the news media, public pressure (or lack thereof) on lawmakers, and the execution of innocent persons are the primary reasons why these two nations have reached different opinions on capital punishment. This research also proposes some implications for both abolitionists and retentionists in the United States in regards to how they may best achieve their different end goals.