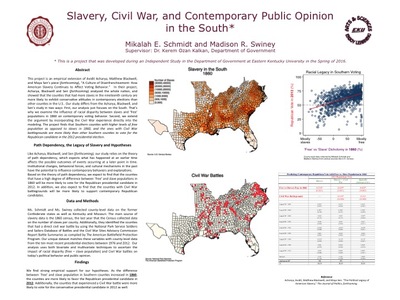 This project is an empirical extension of Avidit Acharya, Matthew Blackwell, and Maya Sen’s piece (2015), “A Culture of Disenfranchisement: How American Slavery Continues to Affect Voting Behavior.” In their project, Acharya, Blackwell and Maya (2015) show that the counties that had more slaves in the nineteenth century are more likely to exhibit conservative attitudes in contemporary elections. We are extending this argument by measuring potential influence of Civil War battlegrounds on recent voting patterns and political predispositions. We collect county-level data on the former Confederate states as well as Kentucky and Missouri. The project’s main source of slavery data is the 1860 Census – the last year that the Census collected data on the number of slaves per county. We also identified the counties that had a direct civil war battle. The ultimate dataset matches these variables with the county-level data from the most recent ten presidential election results between 1976 and 2012. We hypothesize that counties with civil war battles will be more likely to vote for Republican presidential candidate in the recent presidential elections. We also expect this link to grow stronger with the election of first African American president in 2008. Our analysis will use both bivariate and multivariate techniques to ascertain the impact of slavery and civil war on today’s political behavior. We anticipate finding further support for Acharya, Blackwell and Sen’s study on the predictive power of Southern historical forces over current-day voting behavior.