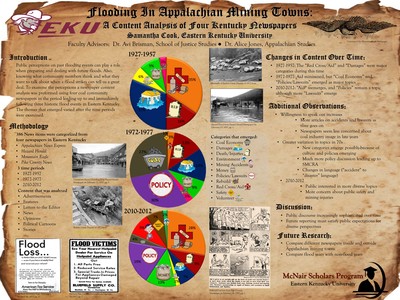 This poster presents findings from a study conducted on newspaper reports of flooding events in Appalachian mining towns. Four Eastern Kentucky newspapers (Mountain Eagle, Appalachian News Express, Hazard Herald, and Pike County News) were examined for the years 1927-57, 1972-77 and 2010-12. These years were picked because they are periods where major flooding events occurred in the region of Appalachia. A content analysis revealed that changes within and between each period. While “aid” appeared frequently in the 1927-57 period, floods were often referred to as “accidents,” and the 1970s saw the introduction of “disaster” language with respect to both mining and flooding. The 1970s also demonstrated the first instances of reports concerning legislation and policy relating to mining and flooding, reflecting greater public awareness of and political response to environmental issues and concerns. All things considered public perceptions on past flooding events can play a role when preparing and dealing with future floods after all public safety is imperative.