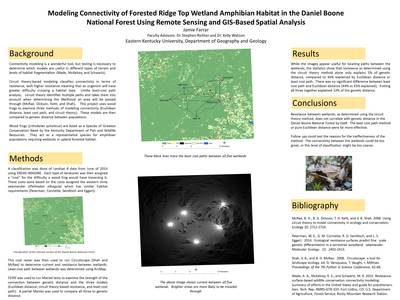 Wood frogs (Lithobates sylvaticus) are listed as a Species of Greatest Conservation Need (SGCN) by the Kentucky Department of Fish and Wildlife Resources. Wood frogs act as a representative species for amphibian populations requiring wetlands in upland forested habitat. This project uses circuit theory to model dispersal and gene flow of wood frogs as a method of determining connectivity between wetlands in the Daniel Boone National Forest in Southeastern Kentucky. The electrical resistance model was used to represent the difficulty an organism has crossing a specific habitat type. The resulting current between chosen nodes reflects the net possibility of movement through a particular location. Unlike least-cost path analysis, it identifies multiple alternative paths and their importance rather than only the path with the lowest cost to travel. Land cover classification maps were created using Landsat 8 satellite imagery and ERDAS Imagine software. Circuit theory was implemented using the open-source toolbox Circuitscape in ArcMap. Resistance calculations for wood frogs were based on data from studies of spotted salamanders due to the similarity of habitat requirements. Using five wetlands (known breeding areas) as nodes revealed that physical distance between wetlands may be less significant for dispersal than the resistance values of nearby landscape features; a finding also supported by available genetic data. The methods and results from this research are valuable for monitoring habitat fragmentation and can be used to identify populations at risk of isolation.