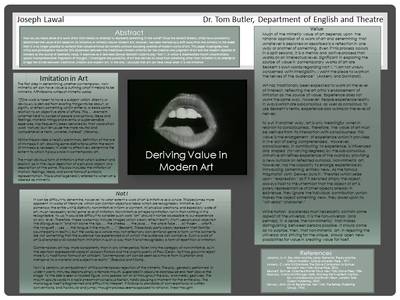 How do you make sense of a work of art that makes no attempt to represent something in the world? Since the ancient Greeks, critics have consistently determined the value of art based on its imitative or mimetic nature. Modern art, however, has been marked by a shift away from the mimetic to the extent that it is no longer possible to contend that valued art must be mimetic without excluding swathes of modern works of art. This paper investigates how critics and philosophers reconcile this disconnect between the traditional mimetic criterion for the creation and judgment of art and the modern rejection of mimesis as the source of aesthetic value. It examines as a test-case Samuel Beckett’s bizarre play “Not I”, in which a disembodied mouth uncontrollably spouts incomprehensible fragments of thought. I investigate the possibility of art that derives its value from something other than imitation in an attempt to bridge the divide between traditional criticism and modern art. In the end, I conclude that art can have value when it is not imitative.