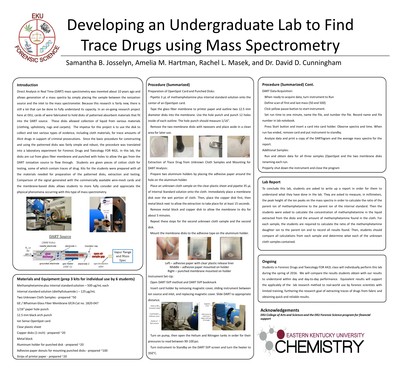 Direct Analysis in Real Time (DART) mass spectrometry was invented about 10 years ago and allows generation of a mass spectra by simply placing the sample between the ionization source and the inlet to the mass spectrometer. The ionization source heats helium gas, flowing at about 2 L/min, which passes over or through the sample. To increase the amount of sample that will ionize and facilitate rapid testing of a large number of samples, a manufacturer developed a card with a thin strip of wire mesh so that small liquid samples (3 µL) can be pipetted onto the mesh. In an on-going research project here at EKU, cards of the same size were fabricated to hold disks of patterned absorbent materials. These disks allowed collection of liquid from various materials (clothing, upholstery, rugs and carpets). The impetus for this project is to use the disk to collect and test various types of evidence, including cloth materials, for trace amounts of illicit drugs in support of criminal prosecutions. Since the basic procedure for constructing and using the patterned disks was fairly simple and robust, the procedure was translated into a laboratory experiment for Forensic Drugs and Toxicology FOR 442L. In this lab, the disks are cut from glass fiber membrane and punched with holes to allow the gas from the DART ionization source to flow through. Students are given pieces of cotton cloth for testing, some of which contain traces of drug. Extraction of trace drug is accomplished by addition of a small amount of water-based solvent (35 µL) including an internal standard to the cloth, followed by application of the patterned disk to suck-up the liquid. The disk is mounted in the holder and mass spectra generated and analyzed. Kits for the students were prepared with all the materials needed for preparation of the patterned disks, extraction and testing. Comparison of the signal generated with the commercially available wire-mesh cards and the membrane-based disks allows students to more fully consider and appreciate the physical phenomena occurring with this type of mass spectrometry.