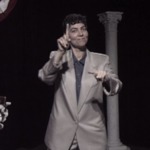 Download Excerpt of the English speech that was translated (.docx) (16 KB)

Ladies and gentlemen of the convention, my name is Geraldine Ferraro. I stand before you to proclaim tonight: America is the land where dreams can come true for all of us. As I stand before the American people and think of the honor this great convention has bestowed on me, I recall the words of Dr. Martin Luther King, Jr., who made America stronger by making America more free. He said: “Occasionally in life there are moments which cannot be completely explained by words. Their meaning can only be articulated by the inaudible language of the heart.” Tonight is such a moment for me. My heart is filled with pride. My fellow citizens, I proudly accept your nomination for Vice President of the United States. And I am proud to run with a man who will be one of the great presidents of this century, Walter F. Mondale. Tonight, the daughter of a woman whose highest goal was a future for her children, talks to our nation’s oldest party about a future for us all. Tonight, the daughter of working Americans tells all Americans that the future is within our reach if we’re willing to reach for it. Tonight, the daughter of an immigrant from Italy has been chosen to run for Vice President in the new land my father came to love. Change is in the air, just as surely as when John Kennedy beckoned America to a new frontier; when Sally Ride rocketed into space and when Rev. Jesse Jackson ran for the office of President of the United States. By choosing a woman to run for our nation’s second highest office, you send a powerful signal to all Americans. There are no doors we cannot unlock. We will place no limits on achievement. If we can do this, we can do anything. Tonight, we reclaim our dream. We’re going to make the rules of American life work fairly for all Americans again. To an administration that would have us debate all over again whether the Voting Rights Act should be renewed and whether segregated schools should be tax exempt, we say Mr. President: Those debates are over. The issue of civil, voting rights, and affirmative action for minorities must not go backwards. We must—and we will—move forward to open the doors of opportunity. To those who understand that our country cannot prosper until we draw on the talents of all Americans, we say: We will pass the Equal Rights Amendment. The issue is not what America can do for women, but what women can do for America. To the Americans who will lead our country into the Twenty-First Century, we say: We will not have a Supreme Court that turns the clocks back to the Nineteenth Century. To those concerned about the strength of American family values, as I am, I say: We are going to restore those values—love, caring, partnership—by including, and not excluding those whose beliefs differ from our own. Because our own faith is strong, we will fight to preserve the freedom of faith for others.

To fully use the Cokely Parallel Corpus (CPC) data provided here, you will need to download and install the latest version of ELAN (this software application is free). You will also need to have access to spreadsheet or database software such as Microsoft Excel, or Google Sheets. The above download links include:

This work is licensed under a Creative Commons Attribution-Noncommercial-Share Alike 4.0 License.