Using NetworkTheory to Inform Ecological Restoration in the Tropics 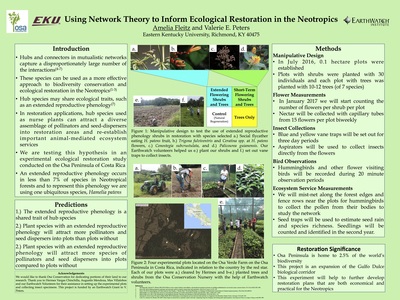 Empirical studies of plant-animal interaction networks repeatedly find that a small number of plant species capture a disproportionately large number of the interactions. These species are known as hubs and connectors. Species traits shared by hubs and connectors have not been experimentally tested, but one hypothesized trait is an extended reproductive phenology. The success of ecological restoration in the Neotropics may depend on whether plant species selected to facilitate restoration can capture a higher number of interactions among the animal-plant community, including those related to seed dispersal and pollination. Our study aims to test whether plant species with an extended reproductive phenology can capture a greater number of pollination and seed dispersal events during the early stages of ecological restoration, and whether this, in turn results in higher species richness of flower visitors, increased pollination services and higher numbers of established seedling species. To meet our objectives, one plant species with an extended reproductive phenology and two plant species with a one or two month long reproductive phenology were experimentally planted in replicated plots in an old pasture on the Osa Peninsula of Costa Rica during June-July 2016. Over the next two years the response of pollinators, pollination services and seeds/seedlings will be measured.