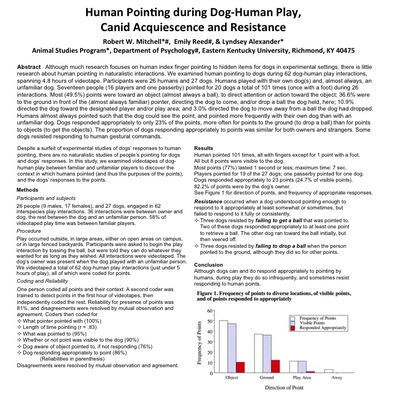 Although much research focuses on human index finger pointing to hidden items for dogs in experimental settings, there is little research about human pointing in naturalistic interactions. We examined human pointing to dogs during 62 dog-human play interactions, spanning 4.8 hours of videotape. Participants were 26 humans and 27 dogs. Humans played with their own dog(s) and, almost always, an unfamiliar dog. Seventeen people (16 players and one passerby) pointed for 20 dogs a total of 101 times (once with a foot) during 26 interactions. Most (49.5%) points were toward an object (almost always a ball), to direct attention or action toward the object; 36.6% were to the ground in front of the (almost always familiar) pointer, directing the dog to come, and/or drop a ball the dog held, here; 10.9% directed the dog toward the designated player and/or play area; and 3.0% directed the dog to move away from a ball the dog had dropped. Humans almost always pointed such that the dog could see the point, and pointed more frequently with their own dog than with an unfamiliar dog. Dogs responded appropriately to only 23% of the points, more often for points to the ground (to drop a ball) than for points to objects (to get the objects). The proportion of dogs responding appropriately to points was similar for both owners and strangers. Some dogs resisted responding to human gestural commands. Whether or not animals in other pointing studies resist human pointing requires examination.