Change Blindness in a Virtual Arcade 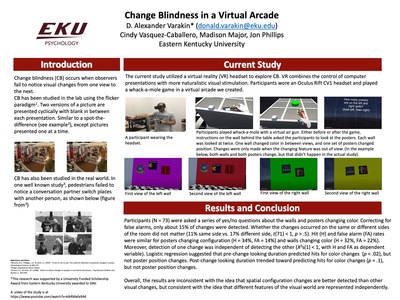 Change blindness (CB) occurs when observers fail to notice changes that occur from one view to the next. It can occur with many different stimulus types (shapes, pictures, movies, real objects) in a many different contexts (from laboratory to “on the street”). The current experiment utilized virtual reality (VR) to explore incidental detection of changes that could not easily happen in the real world. Participants (N = 73) played a version of a “whack-a-mole” game in a VR arcade. Before or after playing the game, they were instructed to look at the posters on each of the walls twice. Unbeknownst to participants, attributes on the left and/or right wall changed across views: one set of posters changed in spatial configuration and one wall changed color. Changes occurred while participants looked in the direction opposite of the changing feature, ensuring changes would not capture attention. Participants were later asked which objects in the virtual environment had changed. Correcting for false alarms, about 15% of changes were detected. Whether the changes occurred on the same or different sides of the room did not matter. Hit and false alarm rates were similar for posters changing configuration and walls changing color. Moreover, detection of one change was independent of detecting the other. Overall, the results are inconsistent with the idea that spatial configuration changes are better detected than other visual changes, but consistent with the idea that different features of the visual world are represented independently.