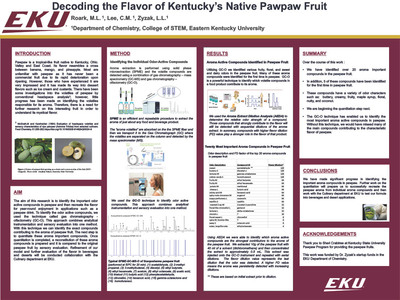 Pawpaw is a tropical-like fruit native to Kentucky, Ohio Valley and East Coast. Its flavor resembles a cross between banana, mango, and pineapple. Most are unfamiliar with pawpaw as it has never been a commercial fruit due to its rapid deterioration upon ripening. There have been some investigations into the volatiles of pawpaw by conventional headspace analysis; however, little progress has been made on identifying the volatiles responsible for its aroma. Therefore, the aim of this research is to apply Gas Chromatography – Olfactometry (GC-O) to identify the important odor active compounds in pawpaw and recreate the flavor for year-round enjoyment in applications such as a pawpaw drink.

We have identified over twenty aroma important compounds in the pawpaw fruit. Five of these compounds have been identified for the first time in pawpaw fruit. These compounds have a variety of odor characters including buttery, creamy, fruity, maple syrup, floral, nutty, and coconut. After identification, we quantified these compounds. Our goal is to accurately quantitate of these aroma compounds so that we can “recreate” pawpaw aroma by mixing these compounds at specific concentrations. These flavor mixes will be compared to the true pawpaw aroma to validate our studies. We utilized both solvent extraction and solid phase microextraction – Gas Chromatography – Mass Spectrometry techniques for our quantitation work. The GC-O technique has enabled us to identify the most important aroma active compounds in pawpaw. Without this technique, we would have missed many of the main compounds contributing to the characteristic flavor or pawpaw.