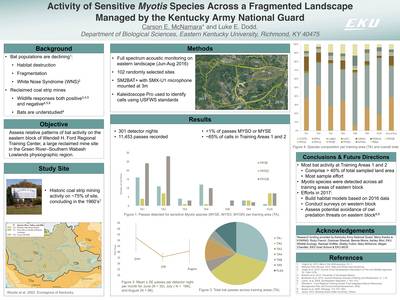 Bat populations across North America are in decline due to habitat loss and, more recently, the impacts of White-Nose Syndrome. Understanding bat activity across landscapes dominated by non-native vegetation contributes to the success of conservation and management plans, which may increase the amount of suitable habitat for federally-listed species such as Myotis sodalis and Myotis septentrionalis. Our first-year objective was to develop a list of bat species present at the Wendell H. Ford Regional Training Center in Muhlenburg County, Kentucky. This area was historically mined for coal and is now mainly composed of non-native or invasive vegetation. Wildlife Acoustics SM2BAT+ detectors were deployed at 102 randomly selected sites across the landscape from June to August 2016. Full spectrum analysis was used to automatically assign identifications to the recorded calls. In total, 11,453 passes were recorded. Less than 1% of the passes were identified as either M. sodalis or M. septentrionalis. Even so, M. sodalis and M. septentrionalis passes were detected, suggesting that imperiled Myotis are likely present on the landscape, but not abundant. Future survey efforts in 2017 will identify habitat characteristics that may influence the distribution of these bats.