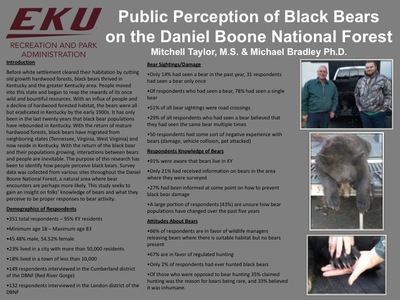 Before white settlement cleard their habitation by cutting old growth hardwood forests, black bears thrived in Kentucky and the greater Kentucky area. People moved into this state and began to reap the rewards of its once wild and bountiful resources. With an influx of people and a decline of hardwood forested habitat, the bears were all but eradicated in Kentucky by the early 1900s. It has only been in the last twenty years that black bear populations have rebounded in Kentucky. With the return of mature hardwood forests, black bears have migrated from neighboring states (Tennessee, Virginia, West Virginia) and now reside in Kentucky. With the return of the black bear and their populations growing, interactions between bears and people are inevitable. The purpose of this research has been to identify how people perceive black bears. Survey data was collected from various sites throughout the Daniel Boone National Forest, a natural area where bear encounters are perhaps more likely. This study seeks to gain an insight on folks’ knowledge of bears and what they perceive to be proper responses to bear activity.