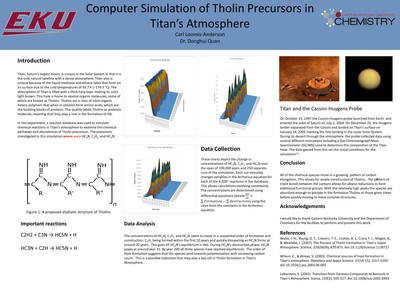 Titan, Saturn’s largest natural satellite, is a unique moon in the Solar System in that it contains a dense gaseous atmosphere. This atmosphere is clouded by a dense brown haze layer. This layer is home to several nitro-organic molecules known as Tholins. A key property of Tholins is that in aqueous solution they dissociate into amino acids which are the building blocks of proteins. Therefore, Tholins are considered prebiotic molecules. To further understand Tholins and if they have played a role in the formation of life on Earth, a knowledge of how they are formed is required. To further understand this, Tholin precursors are investigated using a computer simulation. In this computer simulation, reaction pathways and various precursors are investigated demonstrating the change in concentration over time and the reactions involved. The chemicals investigated are HC­5N, C2H2 and HC3N.