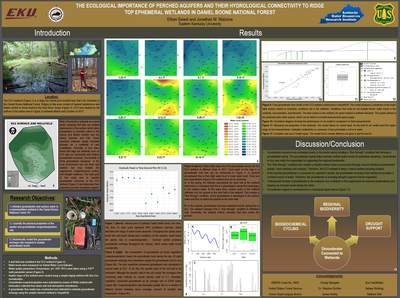 Interactions between surface and ground water in wetland areas can provide a number of functions within the ecosystem it is contained in. Quantifying the extent of these interactions allows for a better understanding of the specific controls in which the wetlands engage. Natural ephemeral wetlands situated among the ridgetops in the Daniel Boone National Forest serve as reservoirs that recharge shallow-perched aquifer systems. Unique interactions between surface and groundwater in these isolated systems provide substantial support for the native ecosystem, serving as a breeding ground for amphibians and as source water for vegetation—especially in periods of drought. Due to the natural wet–dry cycles of these wetlands, quantifying groundwater parameters is difficult. The full extent to which groundwater impacts the wetland ecosystem is not understood in its entirety and could provide a number of additional functions including: increasing regional biodiversity, acting as a drought buffer by extending the inundation period of the wetland and serving a crucial role in biogeochemical cycling. It was the goal of this research project to define the seasonal controls of groundwater levels within the aquifer system. This was accomplished by: Monitoring groundwater and surface water in a representative wetland in the Daniel Boone National Forest, Kentucky. Quantifying the physical properties of the aquifer and groundwater evapotranspiration rate. Numerically modeling the groundwater recharge rate required to sustain groundwater levels by analytic element method. The results of our monitoring indicate that groundwater stored within hillslopes acts as a reserve for the surface water during the Winter months and contributes further support for the ecosystem. In the dynamic transition from Winter to Summer months, the transpiration rate of vegetation intensifies and eventually overcomes the recharge rate of the wetland during leaf-out. The span of this major transition is approximately 20 days. Periodic storm events countervail evapotranspiration allowing both the surface and groundwater within the wetland to be recharged. Using a statistical approach, average conditions for several parameters of the wetland were determined. Aquifer properties were determined physically via slug testing and were used to predict intrinsic behavior of groundwater within this system via analytical element modeling. Preliminary results indicate a recharge rate of 0.002 meters / day, a value which correlates with results from physical aquifer testing.