Parallel corpora based on economically and politically dominant language pairs are widely available to interested researchers. Many minority languages, such as the 100+ signed languages used around the world, do not have language technology resources such as corpora. In order to build a corpus for any language, there needs to be a way to represent the language in a database. This entails the use of electronic text based on the standard writing system of the language. However, if a language does not have a writing system, it is challenging to find a suitable electronic representation that can be automatically searched and processed in a database.

An emerging approach for developing corpora for signed languages is to utilize an ID-Gloss system based on the majority writing system of the country in which the sign language is used. For example, different systems of English-based ID-Glosses represent the mutually unintelligible signed languages used in the UK and the US—British Sign Language and American Sign Language respectively. An ID-Gloss is a unique text label for each sign that consistently represents all instances of the same sign across the corpus. ID-Glosses are maintained in a lexical database as a controlled vocabulary for each corpus project. Software tools such as ELAN can maintain the time-based relationship between the video recording of signed language discourse and the ID-Gloss annotations for each sign added by the researcher. Annotating complete discourses with ID-Glosses is how corpora are created for these languages. For parallel corpora, there is an additional representation established between units in the original source text and the corresponding units in the translation.

The original Cokely Parallel Corpus used a project-specific ID-Gloss lexical database. These ID-Glosses were used to annotate the six American Freedom Speeches DVD video translations in ELAN. To create the parallel corpus, the annotations were then exported as text transcriptions to a Microsoft Excel spreadsheet where the transcriptions were divided at the utterance and idea unit levels. Also within the spreadsheet, the English source text was divided at the sentence and idea unit levels. The ASL translation units were then aligned with the corresponding English source text units in the spreadsheet. In the original research project, the spreadsheet was also used to tag, code, and analyze the corpus to answer specific research questions. For detailed procedures of how the Cokely Parallel Corpus was originally created, see this guide and Chapter 3 of Roush, 2018). 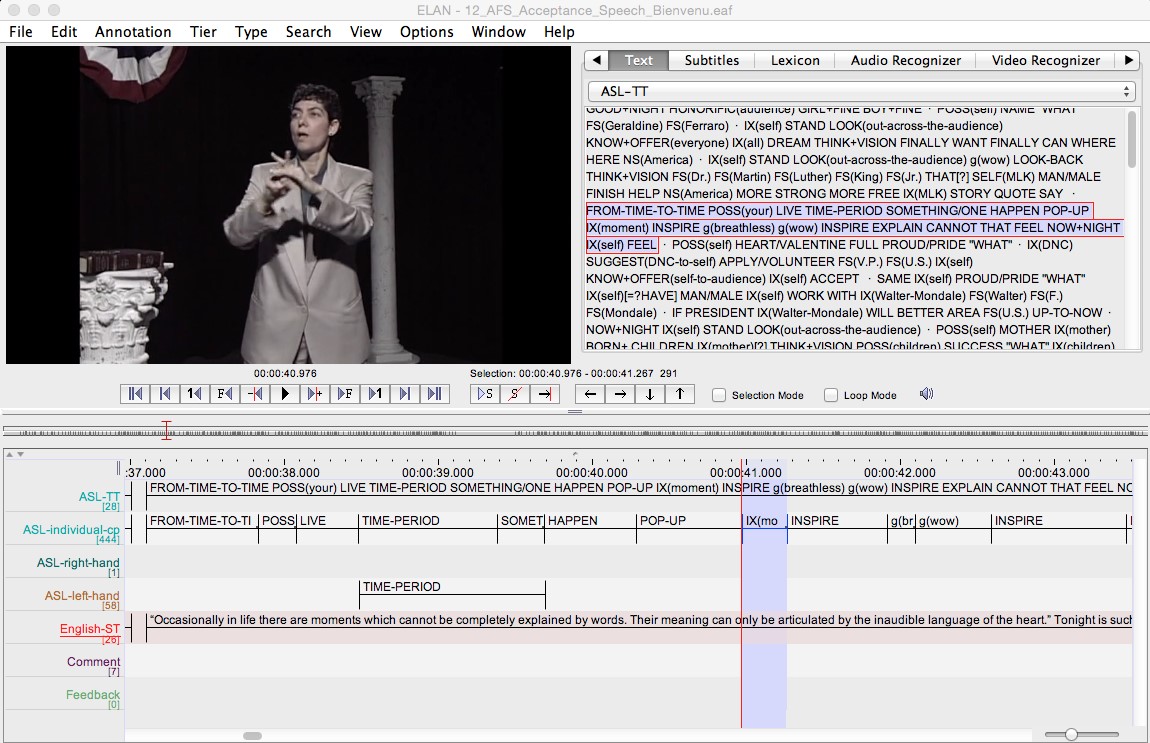 Example of how an ASL translation video is annotated along time-based tiers in ELAN.

Quality translations of important American political and legal works into American Sign Language are rare. The work of preparing the data such as securing copyright permissions, developing an ID-Gloss lexicon, identifying ASL utterance boundaries, and annotating signs is a painstaking process. Moreover, as with most translations, the original sentences can be split, merged, omitted, added, or reordered by the translator. This requires a sophisticated mapping schema and tools to show the complex correspondences between units in the original text and the translation. These barriers make the development of a parallel corpus a non-trivial task. This is especially true in the case where one or both of the languages do not have a writing system. To allow other researchers to benefit from the fruits of our labor, we are excited to offer this free ASL language resource for use under a Creative Commons BY-NC-SA 4.0 license.

To fully use the Cokely Parallel Corpus (CPC) data you will need to download and install the latest version of ELAN (this software application is free). You will also need to have access to spreadsheet or database software such as Microsoft Excel, or Google Sheets. The CPC is organized into separate pages that can be accessed below. Each page contains:

In keeping with the terms of the Creative Commons BY-NC-SA 4.0 license, please use both of the following citations on any work resulting from the Cokely Parallel Corpus:
Printing is not supported at the primary Gallery Thumbnail page. Please first navigate to a specific Image before printing.