The Chautauqua Journal is an interdisciplinary journal that publishes essays, articles, and creative works for inclusion in volumes that explore the annual themes of the Eastern Kentucky University Chautauqua Lecture Series.

See the Aims and Scope for a complete coverage of the journal.

This second volume of The Chautauqua Journal combines submissions related to the 2011-12 series on "Living with Others" and the 2012-13 series on "Crossroads," with the inclusion also of a piece from the 2017-18 "Transformations" series. Like the inaugural volume, it contains essays, articles and creative works by a host of prominent scholars and public intellectuals, including two Pulitzer Prize winning historians, alongside the contributions of a number of Eastern Kentucky University professors. The depth and diversity of the authors whose work appears in this issue of the journal can be appreciated at a glance in the list of Contributors. We hope that readers enjoy volume two of The Chautauqua Journal.

The Chautauqua Journal, Complete Volume 2: Living with Others / Crossroads

Living with Others: The African American Experience
Arnold Rampersad

Lincoln and the Constitution: From the Civil War to the War on Terror
Mark E. Neely Jr.

Reflections of a White Southerner in the Freedom Struggle
Bob Zellner

Christian Faith and Struggles for Justice (A Reply to Metaxas)
Carolyn R. Dupont

Is There a GPS for Lost in Translation?
Carole Garrison

Abiding With Me
John Lackey

Walking a Mile in Your Shoes
Matthew P. Winslow

The Wolf and the Philosopher
Mark Rowlands

How to Build a Domesticated Fox: The Start of a Long Journey
Lee A. Dugatkin

Whither Education in Kentucky: The Challenges and Promises for the 21st Century
William E. Ellis 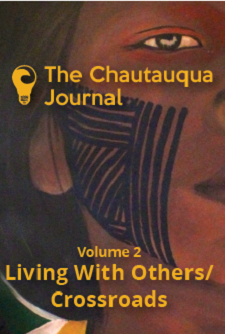